We walked down Nearwater Lane to Weed Beach. It was already 18 degrees Centigrade at 8 am. We walked along the shoreline, looking out to sea and, watching the flock of seagulls and the solitary heron. Here at this time, there were very few people. There were only one family and a young woman in black running gear. On the tennis court, a doubles match was going on. Crickets were also just waking from their sleep with intermittent stridulations.

And when we were back on Noreton Avenue and sitting in T’s back garden, the cricket stridulations were constant rather than intermittent even if waxing and waning with a periodicity of 10-15 seconds. In the garden, the canopy was composed of two firs, two silver beeches, and two Acers.

Here in Darien, we were as far from Trumps’ America as one can be, a whole world away from the dark inner world of his prejudices and hate. That particular morning he pardoned a racist Marshall, reintroduced his ban on transgender people from the military as Hurricane Harvey hit and devastated Texas. In Darien, the clapboard homes spoke of a settled and tranquil America even if privileged and affluent.

Two homes on the other side of the road from us were flying the American flag. I am never quite sure of feelings about patriotism and nationalism. It has always seemed to me an easy and potentially treacherous step from patriotism to prejudice and violence.

Is it possible to be Yoruba, deeply so, with all the pride and self-satisfaction of identity without the need for denigrating others, for instance, the Hausa or Ibibio? Lurking within a rich and self-confident identity is the desire to think of others unfavorably. The germ of white supremacist reasoning and rationale – a dangerous and odious ideology – is too easy, far too easily comprehensible, and hence too readily condoned.

We spent the day at PepsiCo headquarters in Purchase. A sculpture garden that was open to the public. The highlights for me were Miro’s Personage, a piece that must be based on ET; Rodin’s Eve; &Max Ernst’s Capricorn (a most complex and subtle piece). Ernst’s piece was a man wedded to what we call ‘mammy water’ and their offspring. It is a formal family sitting for a portrait. There was Leonora Carrington’s Music for the Deaf of a male harpist with hollowed out eyes, maybe he was blind and, Henry Moore’s reclining figure and George Segal’s Three People on Four Benches. 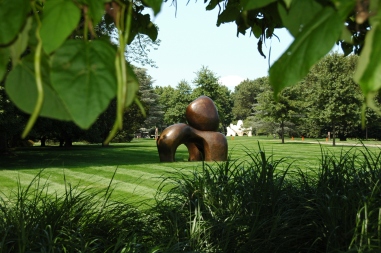 The garden with its lakes, firs, Japanese garden and lotus in flower was simply magnificent. There were carp in the lake, and maples, oak, Kentucky coffee tree, hemlock, and juniper. In the Japanese garden, two frogs made our day. One perched, all glistening emerald on a lotus leaf and the other bullfrog eyes just above the water line, the rest of the body submerged. The glorious lotus flowers were pearl white, pink or yellow in the sun.

Afterwards, we went to Greenwich for lunch at a fast food place, Be Good, for clean and virtuous eating of super grains, quinoa, beans, kale, maize, lettuce and in my case chicken. What is there to say about Greenwich except that its well to do, and that although the High Street wants to mimic an English high street it is far too broad and the shops and their shop fronts too clean, and preserved in aspic.

On the way home, we stopped at Fairway to shop. America is abundant, excessively so. The variety of coffee was astonishing. I bought half a pound of Ethiopian Sidamo and Ethiopian Yirgachieffe, maybe next time Yemeni or Tanzanian coffee. We were preparing Sea Bass with leeks for dinner and maybe some wine.

T told us a story about Fairways- just a few weeks before our arrival, 3 men had filled a trolley full of items but at the checkout, their credit card was rejected thrice and they calmly walked out but the cashier was suspicious enough to call the Police. By the time the Police arrived the men had left. To everyone’s surprise, the men returned and started to unpack the trolley and there underneath the goods was a gun and 10,000 dollars in cash! They were promptly arrested. That is America for you.

Pear Tree Point Road has some of the most impressive house in CT. These houses spoke of old wealth, grandeur, of stability and patrician attitudes. Here all the problems of America seemed far away. Hidden somewhere in the urban, inner cities. All there was here was a slight imperceptible breeze, an otter carrying a fish in its mouth, a daring deer bolting across the road in the late morning. And then the beach at the end of the road, a small bay the shape of a horseshoe. There was a party setting tables, readying for a birthday party. Only a few others were out at this time. There was no one in the water and Long Island across the sound was indistinct in the haze.

An obese man who was power walking went past us as did a young athletic woman and couples cycling as well as families. There were country courtesies of greeting and gestures, not something that I associated with America. The day before at Weed Beach, the attendant at the entrance, a small Italian American with what I took to be a Hollywood Sicilian Mafia accent wanted to talk. He told us that the beautiful birds with yellow breasts were canaries- “In Europe, we call them canaries”- this sentence gave him away as European. He was proud of his camera and his photos. He told us about his picture of a grey squirrel that held a nut with both hands whilst standing on its hind legs (how photogenic). But, alas he couldn’t find it and in any case, a car was waiting to drive in. 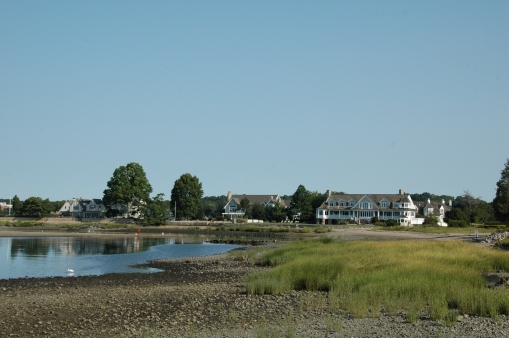 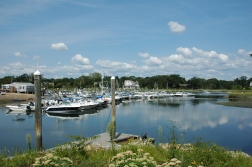 What is a Euro-African to make of the instant bonhomie? Sometimes it all feels all wrong, all fake and superficial. How to account for the lynching and hatred given the friendliness on display? Strange indeed.

Next was out obligatory visit to Broadway. The first night was Miss Saigon, a re-writing of Madam Butterfly, I presume. It was set in Vietnam, Thailand, and USA. Musicals as with opera, one has to accept the improbable and absurd as true. Parodies become facsimile. Angels like in dreams can materialize, and love sprout and blossom in a brothel. We all love to believe the impossible, to see good triumph over the dark and tragic underbelly of life. More troubling and surprising is the admiration for the irrepressible charming cutthroat; in Miss Saigon, the character of the ‘Engineer’ was played masterfully. Here was a ruthless operator who smiled, sang and with cunning daring attempted the impossible.

The youthful and virginal Kim by the end is ‘deflowered’ and corrupted that to rescue her reputation, she had to sacrifice herself for her son’s life in the USA. The meta-theory was sordid but our participation in the narrative thrust relied on our acceptance that the acme of human existence lay in the USA and it went against the grain to accept this unless the USA was merely a symbol of possibility and not the concrete expression of the desirable. No matter!

The following day we walked up 5th Avenue, Madison, 6th, and Broadway. We stopped for lunch at Herald Park, a small park dedicated to the Bennetts, proprietors of the New York Herald. Next stop was Bryan Park. One of the wonders of New York are these parks, green oasis like man-made valleys buried deep within these massive skyscrapers, peaks, and crags piercing the sky. The other miracle was all the people. What Trump dislikes most, what he abhors, even hates most, the immense diversity of the human race. Next to us on the bench, were 2 young Jewish men with skullcaps. Across the way a young Indian couple, studying and talking, then Chinese, Africans, African-Americans, Hispanics, and blond or brunette European Americans. There were tall, short, thin, emaciated, fat, obese, squat, athletic, muscular and in between people. The sheer variety of female thighs and backsides, of postures and gaits, and of dress were astonishing.

Three elderly men were playing petanque with a young black man most probably a French West African used to playing boules; that was just one of the many incongruities that challenged and undermined assumptions about liaisons and alliances, the kind of incivility and separation that Trump stands for and wants to promote. Mixing and miscegenation are quietly going on without Trump’s permission, ruining orthodoxy and enriching the pool of talent that will inherit the earth.

Michael Moore’s one-man show at the Belasco Theatre “Terms of My Surrender” lasted two and a half hours. It was a tour de force of polemic, persuasive communication, diatribe and fire and brimstone sermonizing. We discovered how ignorant Americans were- 11% couldn’t place the USA on a map and 60% did not know where the UK was. Some 88% of Republicans believe that Obama was President and ineffective during Katrina! The peril that is Trump was brought home to everyone, he could still be in power in 2025.

Moore emphasized that doing a little, even a smidgeon to push liberal values and agenda was important. His own life stories were inspiring. After the show we dined at a Cuban restaurant, then in the evening, it was a different kind of theatre- Doll’s House Part 2. Nora Helme returned to Torvald’s house after an absence of 15 years. The dialogue between Nora and Torvald, Anne-Mari, and Emmy allowed for exploration of what it was like for Nora after she left her family, what her aspirations were and what she valued most. It was a competent play that was well acted and directed. It was amusing, humorous, witty but not the greatest theatre. What was radical in Ibsen was merely self-indulgent here. Between Doll’s House and the Lady of the Sea, Ibsen dealt effectively with the basis of marriage, how freedom is essential to equality within a union. In the Doll’s House Part 2, there was far too much talking, not enough Ibsenian action that challenged the audience and that was properly speaking morally troubling.

It was time to return to the suburbs, away from the bustle of New York.

2 thoughts on “Early Autumn in Darien”