I haven’t told you about our trip to Damaraland. We started early, traveling along the coast road from Swakopmund with the ocean to our west. I imagined that if we simply continued going up north we would arrive in Lagos after 4000 miles. As it was, after stopping to look at a recent shipwreck we turned inland towards Hettie’s Bay. 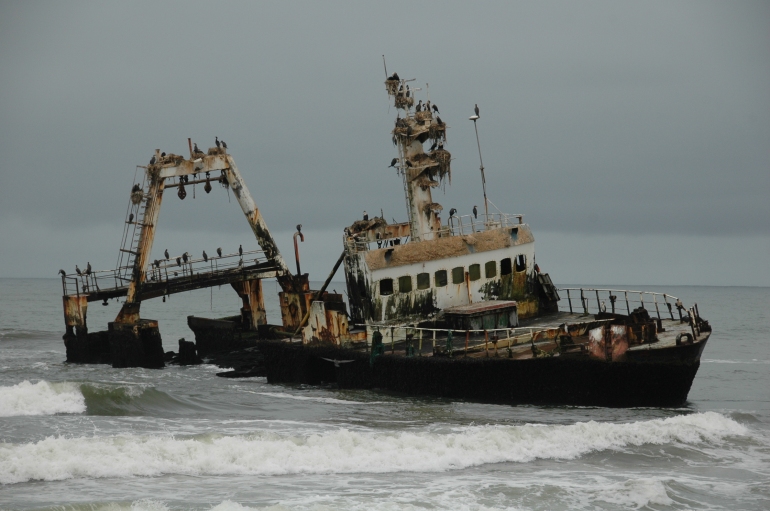 The coast road was a sand road. Unbelievably, a sand road that was as smooth and secure as any paved way. Hettie’s Bay was originally a holiday, second home settlement at the seaside, for white farmers. When we drove through, it also had retirement homes. The center of town had shops, car repair garages, cafes, and petrol stations. We stocked up on provisions at the local Spar shop and filled up with fuel too.

Next stop was Uis, a tin mining town down on its luck. Tin mining had ended because of the poor market value of tin. A tin slagheap dominated the town, glistening and grey colored in the strong sunlight. There were several young men selling gemstones, rose quartz, lapis lazuli, malachite, etc. These were roughhewn, large pieces for as little as £ 6 equivalent. I was confident that they worth much more in the European market.

From here onwards we were back on gravel roads. It was remarkable that one could travel over 350 kilometers and pass no more than half a dozen cars. And people were as rare and rarer still were settlements. We passed cattle grazing on dry bleached fields, herds of goats with goat herders, horses, and donkeys. Suddenly we came upon a man pumping up his cart’s inflatable tires. The cart was being drawn by two donkeys. The cart had a most magnificent spring system to act as shock absorbers. The man calmly set about pumping without fuss and without a drop of sweat in the scorching heat. 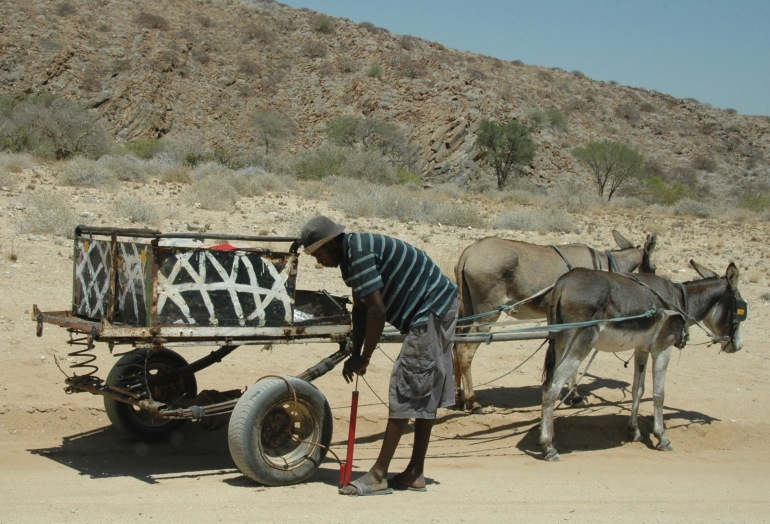 The terrain was as we had come to accept it- sand, rock formations of various types, and majestic in the background for a significant distance was the Brandberg mountain, the highest elevation in Namibia. The colors of the sand were from bleached sand-colored to pristine-white, through golden yellow and then the pinkish red of oxidated iron. In some places the horizon was unenclosed and entirely free and unimpeded in a complete circle, emphasizing the sheer grandeur and limitless extent of Africa.

The sun was ferocious and was nearing its zenith as we moved closer to our destination. We stopped for a picnic lunch along the banks of the dried up Ara Huab, an ephemeral river. Here Acacias and Mopane trees predominated. The Mopane trees were evergreens and in this climate were surprising because the leaves were a fresh, delicate green that was more natural to Northern Europe in early Spring. Yet, here there had been no rain for 5 years. Their taproots went deeply into the water table. There was also euphorbia, an abundance of them. These extremely poisonous trees have a juice that can blind or seriously maim. The oryx grass had been replaced here by camel grass. 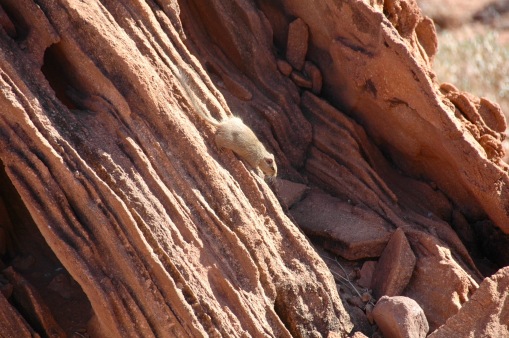 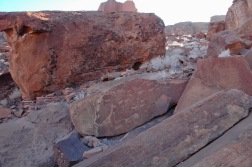 Flies were everywhere. Elephant dung, white hyrax fecal streaks and the small pellets of springbok feces were everywhere. Even though there was a breeze under our chosen tree, it had the heat of an oven and was not pleasing. Around us, there were piles of granite built into towers, into domes, into peaks or merely scattered casually as if left behind by our ancestors.

Our lodge, Mowani lodge, was so discreetly built into the hills that you could not readily see it. And at the back, the chalets opened unto the river valley below. We loved it straight away.

Later we went to the burnt mountain and church organ pipes sights. Burnt mountain is 130 million years old but it looked as if the fire that burnt and scorched it occurred no more than a few weeks ago. That’s how fresh and unexpected the signs of burning were. The church organ pipes were less surprising only because we had seen similar geological structures in Iceland. The structure here was hexagonal in shape and the color was the reddish brown of rust rather than the grey-blue in Iceland.

Our lodge had a sunset viewpoint. We went to join a few others to witness the sunset. The sun was in its final flush, set behind the escarpment in the distance. Before we knew it, the sunset had dropped behind the veil of the escarpment. This was Africa after all.

The next day, we went out to see the rock engravings made by San people, dated back to 6000 years ago. These etchings were at Twyfelfontein (unreliable fountain). Our guide, Desiree, told us once I asked her what her Damara name was, that she was Gangan, meaning “Thank you” and was called Gan for short. I told her that my sister was called Dupe, also meaning “Thank you”. She seemed to like that very much.

Gan was a woman of about 5’ 6”, well built in an athletic way, and her skin was a soft brown. Her teeth were even and white and rarely for Namibian women, she smiled and her eyes danced with interest and mirth when she smiled. She was very gentle in her manner and very knowledgeable. She had that gift of us Africans, a wonderful memory such that she seemed to rehearse facts as if read from a book- precisely and in a kind of trance.

These engravings were astonishing. I was taken by surprise to find that some of the artists signed their engravings with etchings of their feet, much as we sign with our thumbprint today. They took care to distinguish between black and white rhinoceroses- the former was represented simply in outline and the latter had the body scratched out. There was a lion with human hands for its paws and also human hands at the end of its tail. This motif was “lion man” and is thought to represent the local shaman. 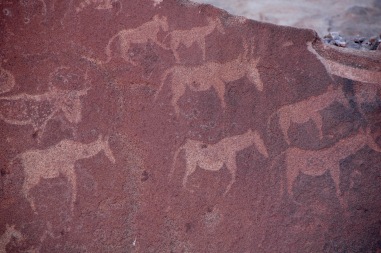 There was an etching of an ostrich with its neck and head in four different positions- probably the world’s first attempt at movement in two-dimensional space. Most extraordinary was a map with markings for the watering holes, where particular animals were to be found and on a slab of stone. To think that here at Twyfelfontein, San people already had the idea of a map to represent the world. In addition, there were several symbols of the foot markings of different animals, probably a type of school to teach how to recognize foot markings and how to track animals. The circles representing rainfall and circles with hollows in the center representing watering holes in my view most eloquently expressed symbolic thought. What an achievement to write life on rocks.

It’s thought that the site was a ritual site where clan meetings were held and the tradition continued right through to the 1940s. The motifs changed and pastoral scenes became predominant as hunter-gatherer existence ended.

The mountain-adapted elephants were not far away from Twyfelfontein. There was no need to go searching for these most elusive animals. They were somewhere in the Ara Huab dried riverbed. We found a group of a dozen or so elephants. There two males and the rest were juveniles and females. There was a juvenile aged about 1 month or so, who was still being nursed. There was an older juvenile, probably a year or so who was also still suckling. Two young males were playing at fighting, practicing for later life. One of the huge males came to join the female-led group. It was obvious that he wasn’t wanted but he ignored this patent fact and pressed his horns over the breech of one of the females as if he was going to mount her. She was not in oestrus but neither was he in heat- he did not have any of the stigmata, neither endless urination nor slavering of the glands over his cheeks. So what was he playing at?

This unforgiving terrain, of unreliable water sources, of dry unbearable heat, of sparse vegetation required of humans and animals alike, remarkable adaptation to have the most fragile of holds on life. It is a life that was far removed from the luxuries of modern life. Yet, the terrain was one of the most beautiful that we had seen in our time. There was always in the distance a mountain range, and proximally rocks and boulders and in between isolated clumps of Acacias, Mopane trees, and Shepherd’s tree. In the evening weaverbirds, sunbirds, glossy starlings, shrikes, and hornbills made their presence known. Agama lizards, hyraxes, and ground squirrels were everywhere. It was a vast and immeasurable terrain that had been here forever.

At night the sky was so rich with stars that it glistened and pulsed like black velvet studded with diadems and gems. All this immensity and we were mere passing dots in eternity.