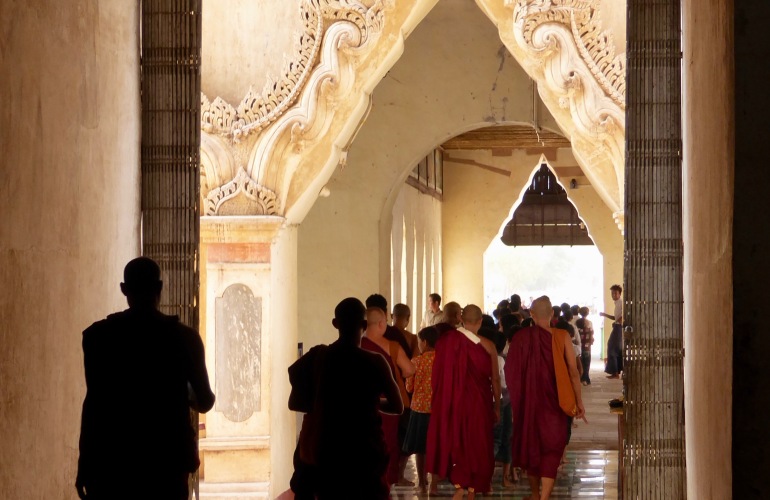 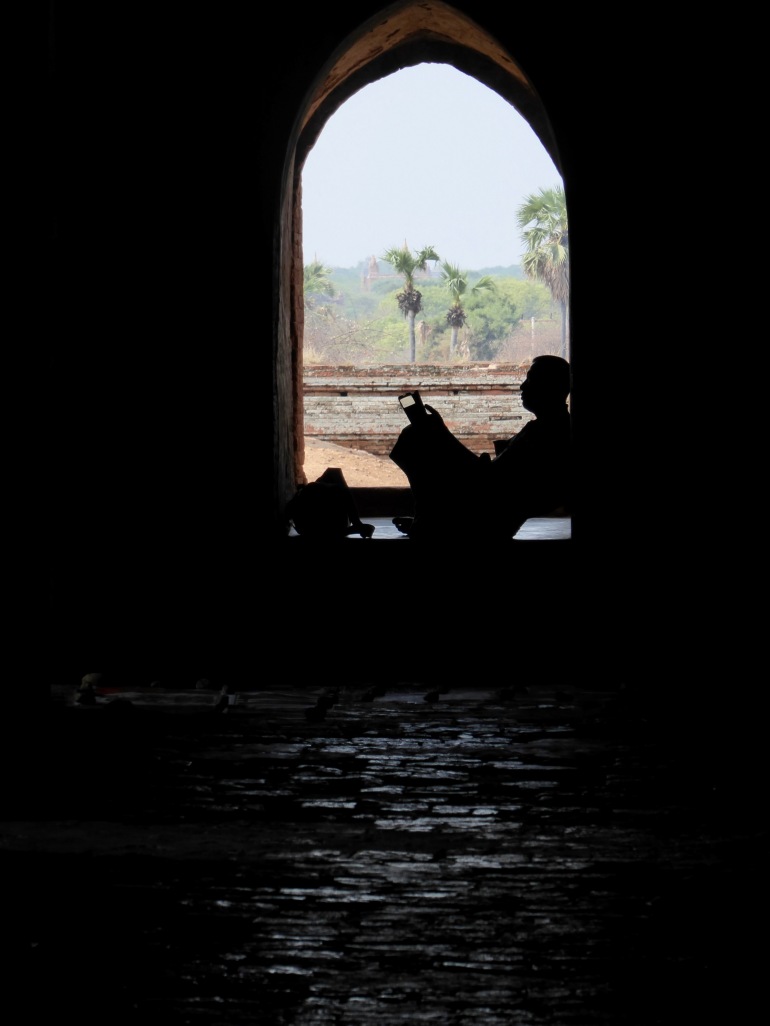 How do you think a whistled note travels through time? Does it streak, a flash of lightning, rending the invisible fabric of time? Or, is it more like breathing, a hollowed-out flute, a shadow-like mirrored gesture of the self? When she whistles, I am surprised at the waveforms, a river that meanders and wraps itself round a desolate countryside. The song lasts 90 seconds at the most but it inhabits a vast expansive territory of dreaming. On the other hand, his whistling glistens sharp, a lance thrown, arrow point sharp at a bull’s eye somewhere in the cosmos. Between the lyrical and the lustrous, an eternity. 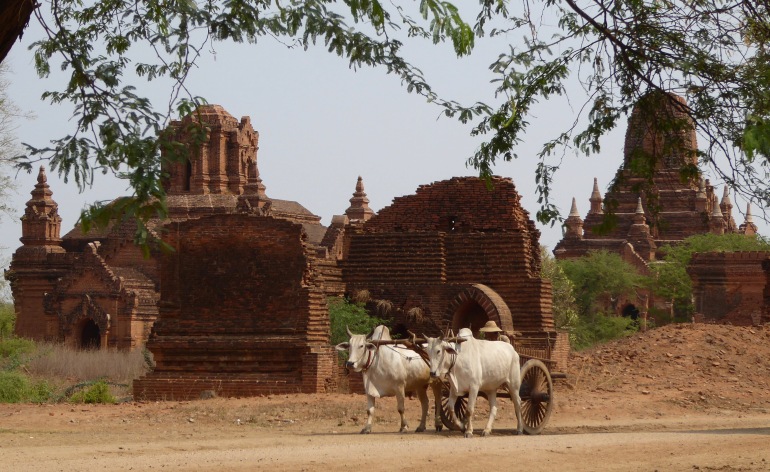 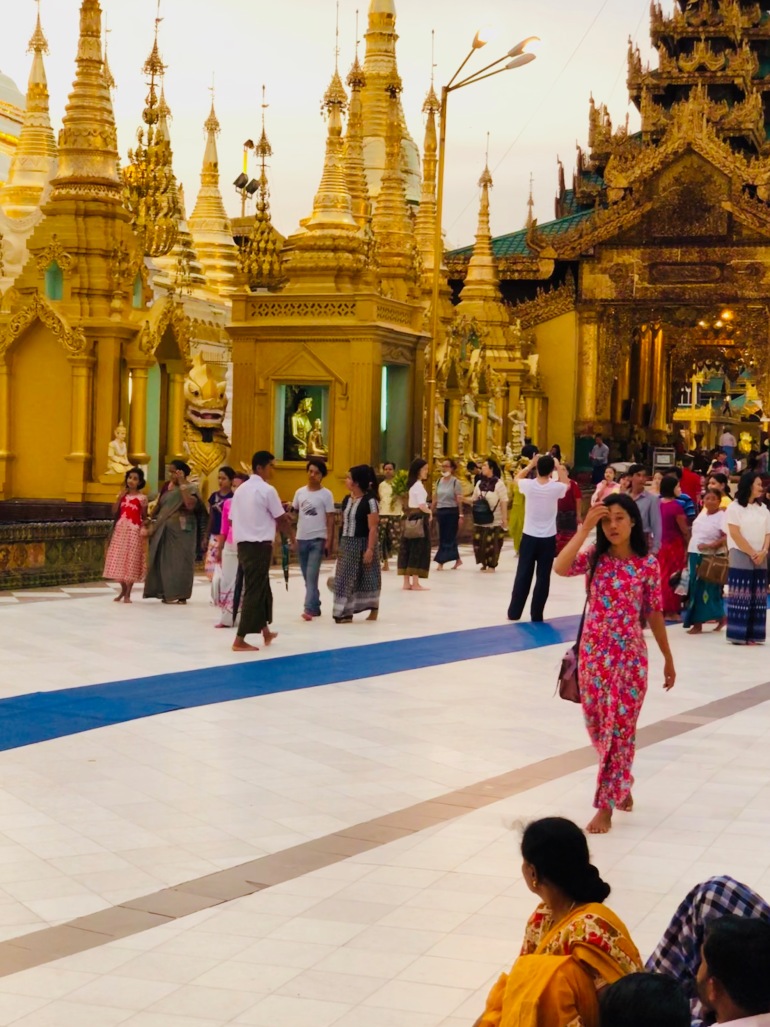 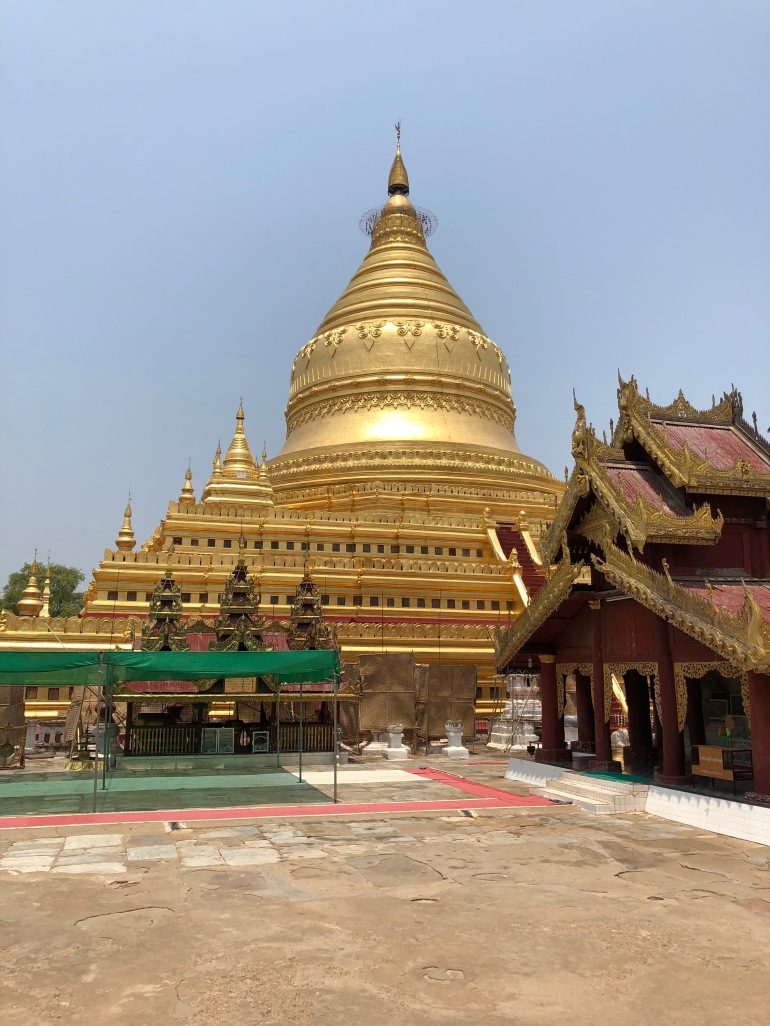 This difference is the difference between Shwedagon Pagoda in Yangon and Shwezigon Pagoda in Bagan. One is all efflorescence and inner space, the other is a shimmering solid statue. Both are representations of the imagined sublime, different aspects of our confrontation with the great unknown and perhaps unknowable. Again an eternity.

We had travelled from Pukokku by boat, across the Ayeyarwaddy river, underneath a hot unforgiven and unforgiving sun. The river was as if abandoned to us; we met at most another three boats as we traversed this mighty river. In the distance was a range of hills that in the haze seemed so far away that we might as well having been dreaming them. Old Bagan is home to stupas and pagodas. You could just as easily say it was where stupas came to die. It has been a major city since AD 874 and was at its peak from 1050 to 1287 when it was sacked by Kublai Khan. It is estimated to have over 3,000 monuments and was once known as ‘the city of 4 million Pagodas’. Earthquakes have often damaged the Pagodas, the last event occurred in 1975 and damaged so many monuments that are yet to be restored. 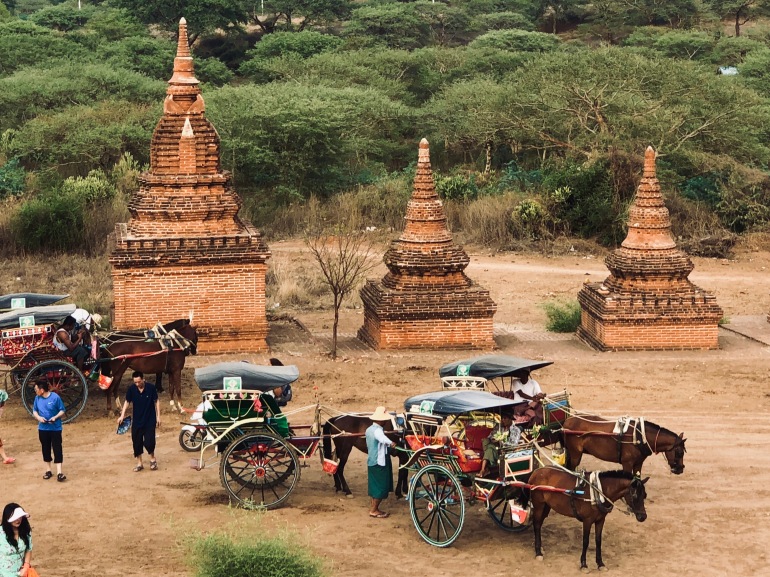 There were 20 monuments of over 150 feet built by kings and several more between 50-70 feet built by queens and ministers. The smaller stupas were built by lesser folk but are no less grand or intricate- what they miss in size they make up for in complexity and flourish. 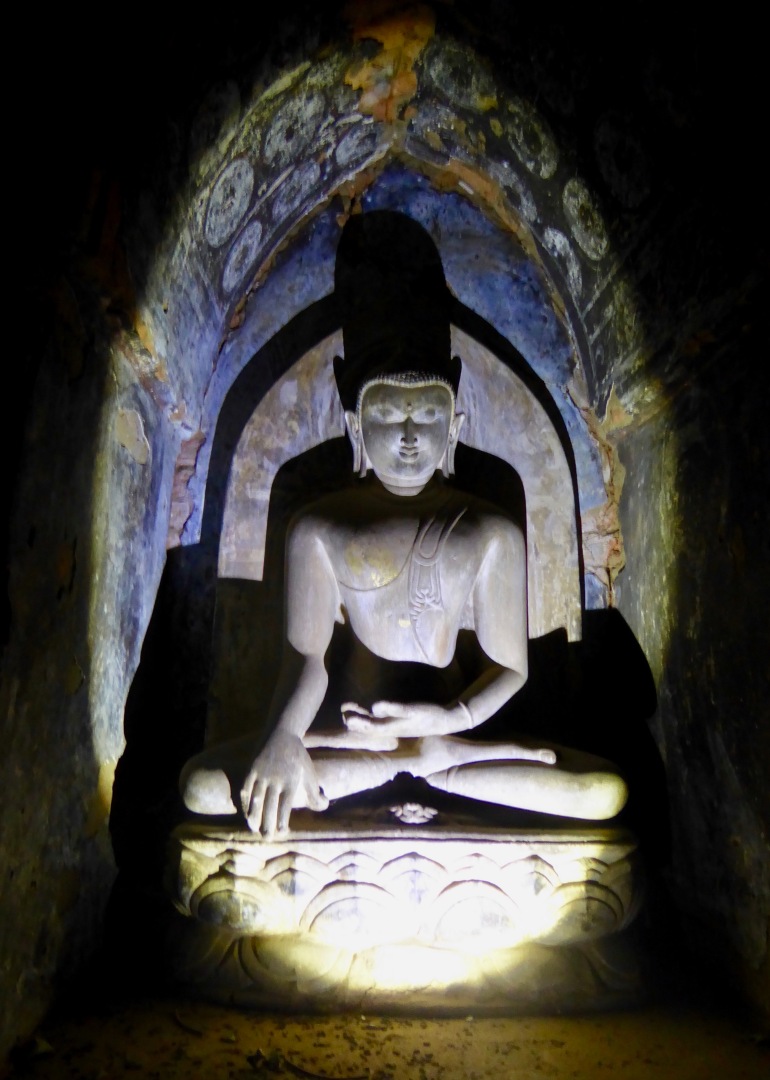 Bagan was an enchanting place- stupas, pagodas and temples were everywhere. There were Neem trees, acacias with silver barks, tamarind trees with their delicate slender leaves, and thorn trees. The Buddhas were varied and always intriguing. Gold leaf adornment had yet to make an inroad into these Pagodas, so the dizzying and overwhelming rococo of Mandalay was not present. The Buddhas here were in the Indian style, with long pointed noses, naturalistic fingers of unequal length, downcast eyes and foreheads shaped by eyebrows. In May, the setting for these extraordinary objects was a dry, dusty landscape, and an absence of rain. 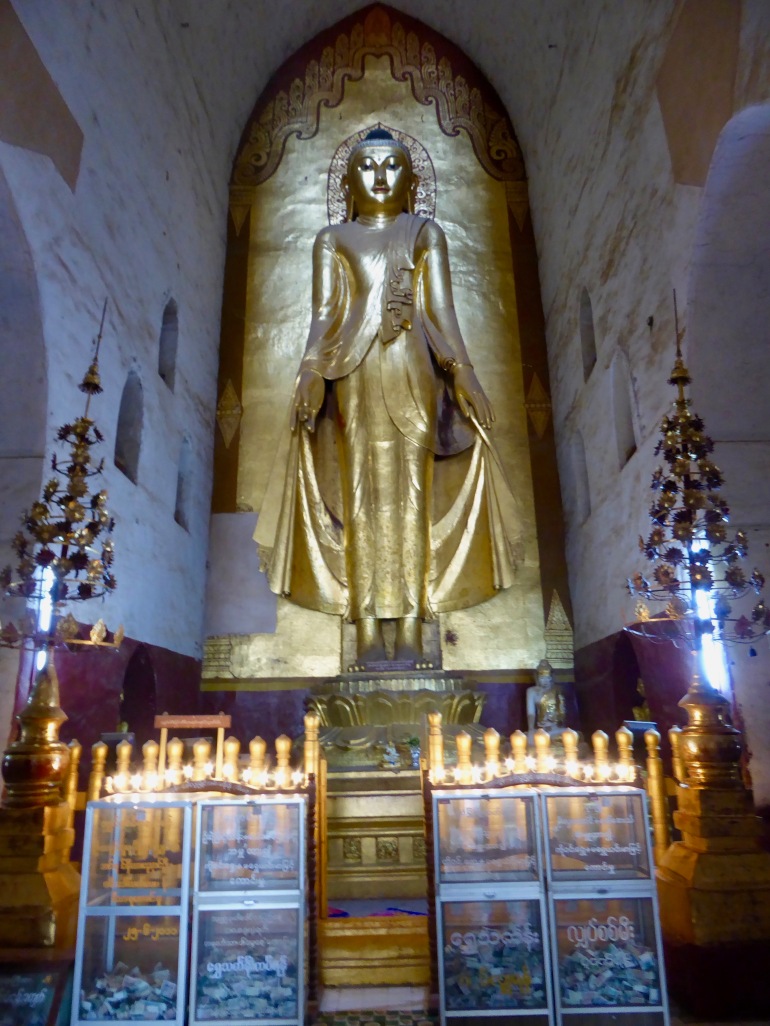 Our guide in Bagan was relaxed even if school masterly in his approach. He was 58 years old. As a boy he had been a a horse drawn carriage driver. He taught us in the Nigerian style of asking a question and answering it himself, repeating facts from different perspectives, then rehearsing them before reconfirming them: “A Pagoda is a solid monument, a temple is hollow, Stupa is the Sanskrit name, the five principles of Buddhism are do not kill, do not lie, do not steal, do not drink alcohol and do not have sexual relations with married people, the important numbers in Buddhism are 1 (the Buddha), 2 (Buddha’s teachings), 3 (Monks), 4 (Teachers in general), 5 (Parents), and on and on”. And then “What did I say about Pagodas?, etc”. 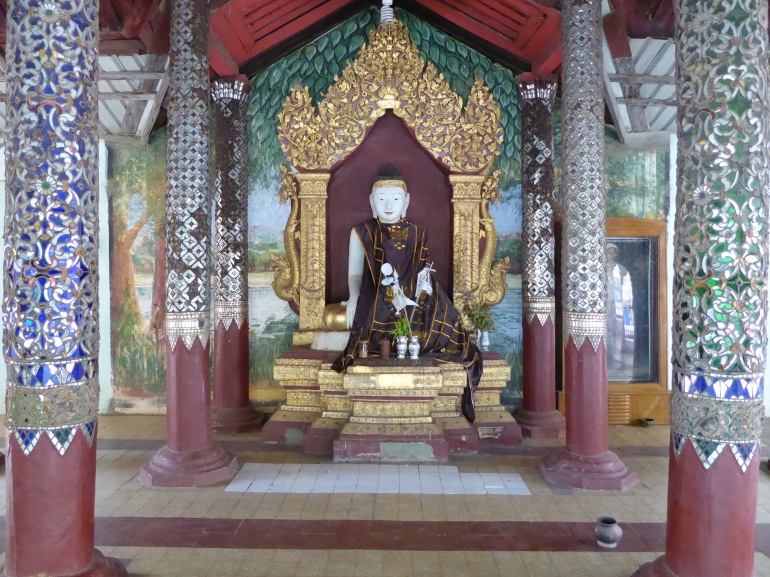 If I might say so, the Burman’s world is a complex world of signs, symbols and meanings. And, I suppose the Buddha’s teachings, his parables are living and active in the world. A young couple eloped because she was from a rich family whereas he was from a slave background. They had two sons and when she was pregnant with the third she became homesick and pined for her parents. On their journey back to their hometown, a son died during a crossing of a flooded river, the second died of a fever at night and her husband died from a snake bite. Now, she was all alone and dejected. She arrived back in her hometown to discover that it was in the immediate aftermath of an earthquake and both parents had died. No one recognised her and she broke down, rent her clothes and reduced to nudity she broke into song. She approached the Buddha and his disciples tried to prevent her because of her nakedness but the Buddha called her forward and covered her nakedness with a cloth. To her surprise he told her that he already knew her story- she had been a rich woman in her previous life and had been robbed and killed by 6 robbers. With her dying breath she had vowed to kill all six if she was ever to come across them in a later life. Well, indeed in her current life she had met and killed them for they were her husband, her two children, her parents and brother. Her wish had been fulfilled! The moral of the story is to beware what you wish for.

These parables are as ornate, as elegant, indeed as structurally resplendent as the Pagodas themselves. The story of Nats, that aspect of Buddhist culture that is unfathomable but intriguing was best illustrated by that of Maung Tint De (Mr Handsome) and his sister Saw Me Ya (Golden Face). These stories have strong and decisive characters who reach violent and underserved ends. There is something about them reminiscent of Greek tragedy, Aristotle’s idea of underserved reversal of position as essential to the tragic, in the twists of Nat stories. The defeated hero or heroines are brought back to life as members of the pantheon of Nats. The oppressive king of Tagaung was anxious that Maung Tint De might become a rival and attempt to overthrow him, so he married Maung Tint De’s sister Saw Min Ya and tricked her into persuading her brother to come out of hiding. The ultimate result was death to both brother and sister by burning. They became Nats and eventually became guardian spirits of Bagan, enshrined at the Tharabha gate. At night, curtains close them in, because they dislike light or fire. Drivers switch their car lights off as they approach the gate. Devotees only leave uncooked food, raw meat or preferably vegetables or fruits since the spirits abhor fire or light. Our guide, Hla Maung told us this story because of the connection between opposition to oppression and Nats and, the not so subtle reference was to the strength and will power of ‘The Lady’. 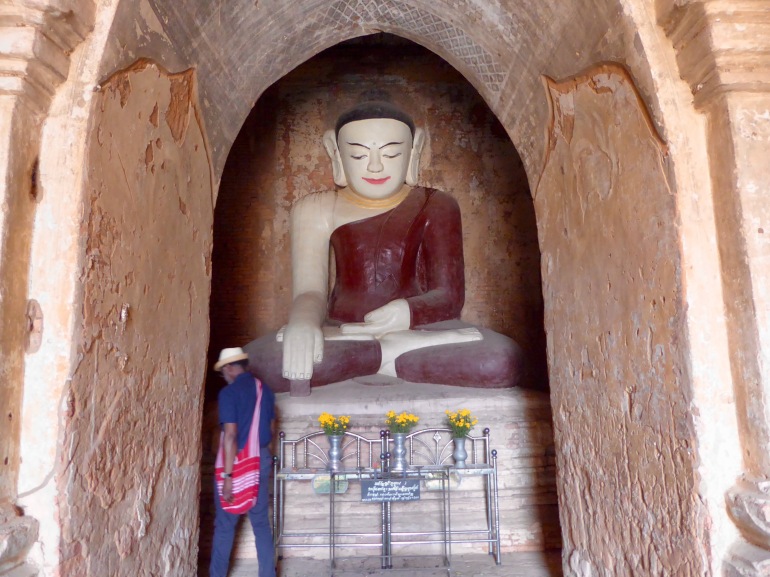 We visited Sulaimani Gu Phaya, built in 1183 AD, Dhammayan Gyi temple completed in 1165, Ananda Phraya and then the magnificent Shwe Zi Gon Pagoda. Sunset was over Manuha temple with its reclining Buddha. The sunset was blood red, dropping behind a picturesque line of stupas in silhouette. The next day at Gu Byauk Gyi temple, the best-preserved temple in Bagan with its extraordinary frescoes, Hla Maung told us another Buddha story. In a previous life the Buddha had been a white elephant. He was friends with a brown and a black elephant. The black elephant was mischievous and enjoyed playing pranks and teasing smaller animals. He stood on frogs, shook the branches of trees so that the young of birds fell out of their nests and died. The black elephant failed to respond to all entreaties to take care of the smaller animals and to moderate his behaviour. He did not heed the Buddha’s pleas either. The smaller animals were determined to take action. The crow picked at the elephant’s eye whilst he was asleep and then invited flies to lay their eggs in the injured eyes. The eggs hatched into maggots and the eyes became putrid and purulent such that the black elephant went blind. The elephant could still eat but relied on his hearing to find water, listening out for frog calls. The frogs set out to deceive him and led him up a mountain path with no water. Tired and exhausted the elephant died and rolled down the mountain. The moral is no matter how big you are, you are not invincible. 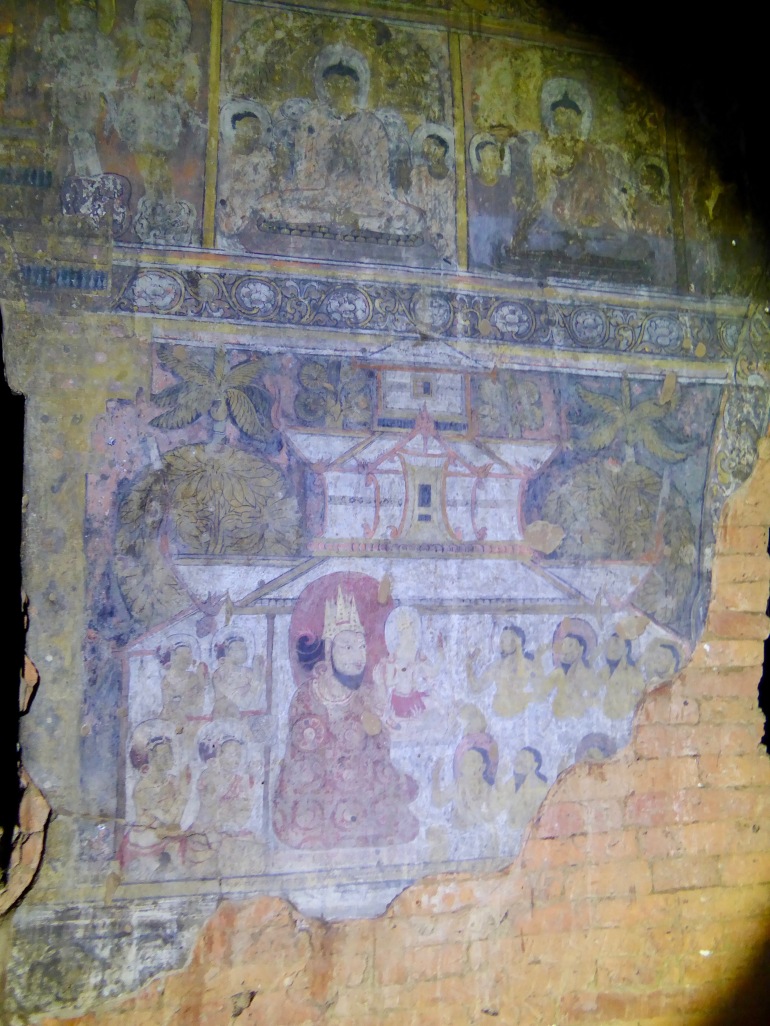 At Nanpaya temple, surprisingly a temple without a Buddha but a Brahma instead. It is a Hindu temple built in sandstone on the site of the prison where the Mon king and queen were kept by the Bagan king in the 11thcentury, 1057 to be precise. King Anawrahta of Bagan used the refusal of King Manuha of Thaton in lower Burma, to comply with some request or another, as a pretext for besieging Thaton and eventually defeating Manuha and imprisoning him and his queen at Myinkaba just south of Bagan. Nextdoor was the Manuha temple built in secret and at night over 8 months by Mons refugees, without their king’s permission. It is a remarkable monument of concrete, it is symbolic of resistance to the Bagan monarchy- it houses four Buddhas, three seated and one reclining. All massive sculptures that seemed crammed into a tight space. The Buddhas are uncomfortable, their chests exaggeratedly high and constrained. These Buddhas are not at peace nor smiling. They are pictures of distress, of unjust incarceration, of great physical and metaphysical oppression. 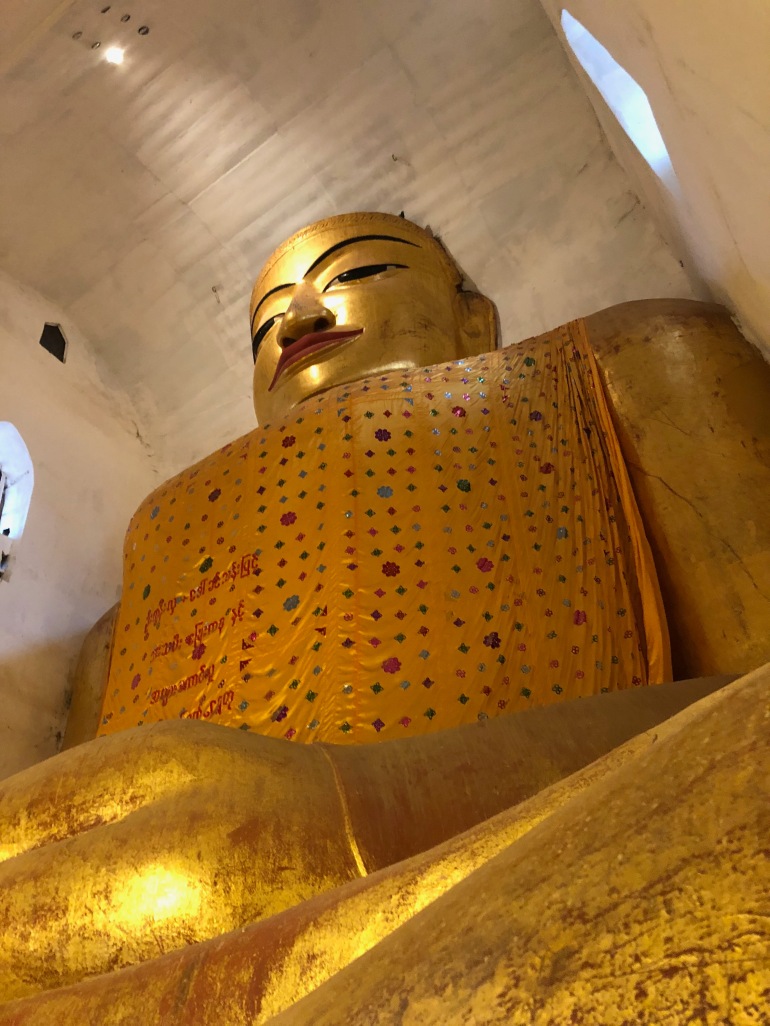 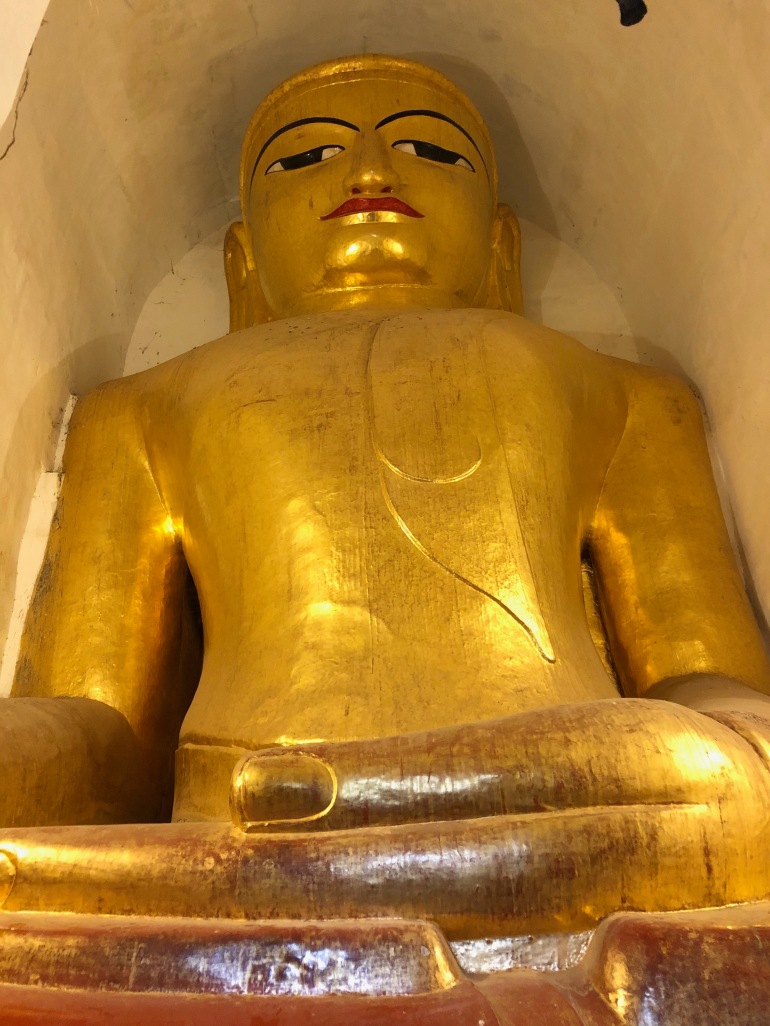 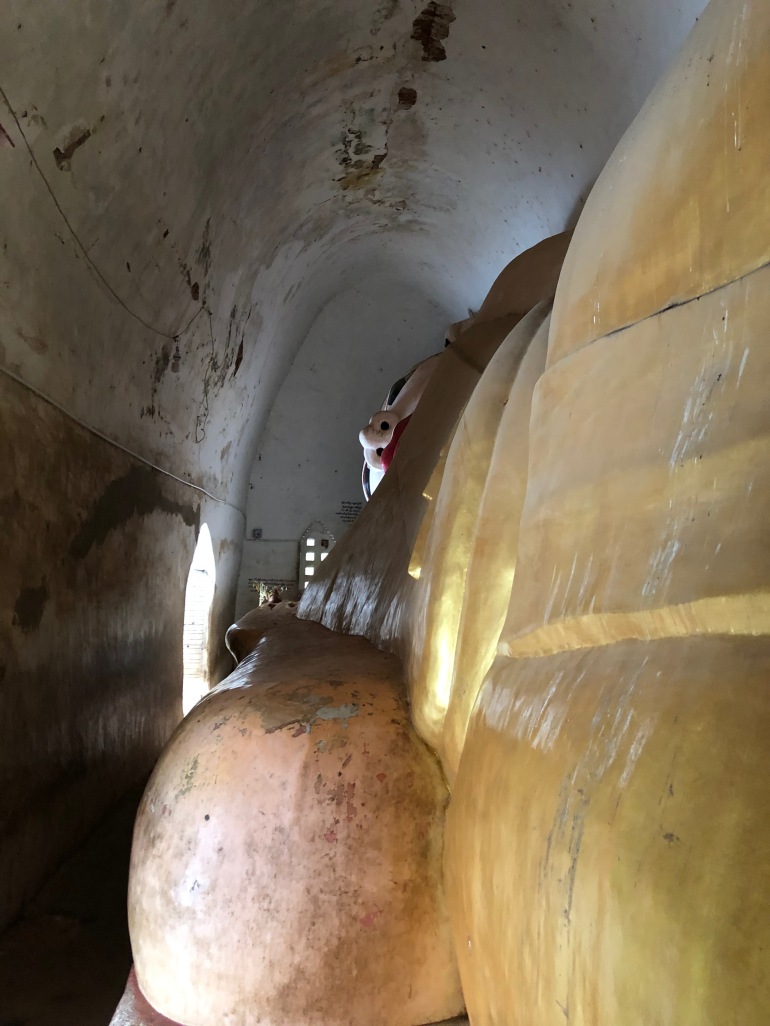 When Anawrahta saw these oppressed Buddhas he is said to have repented his actions and freed Manuha and Manuha’s queen. These Buddhas were locked behind gates, and out of sight during the military rule in Burma, as they had become a pilgrimage site for the family of political prisoners, where prayers were said for the deliverance of the oppressed. Often these relatives of detained people would themselves be arrested and detained merely for visiting this site.

It is a mark of Ang San Su Kyi’s deep understanding of the power of myth and myth making that her first public outing after she was released from house arrest was to Manuha temple. She fully understood the liberation symbolism of these Buddhas with their distressing and oppressive air and she knew too that ordinary people would instinctively grasp her meaning and why she had chosen this particular Pagoda. She also recognised that the exhibition of the sculptures of Manuha’s queen and her female attendants, a previously prohibited exhibition, would resonate with ordinary sentiments and that she would be seen as the suffering female relative of an established hero, her father Ang San. 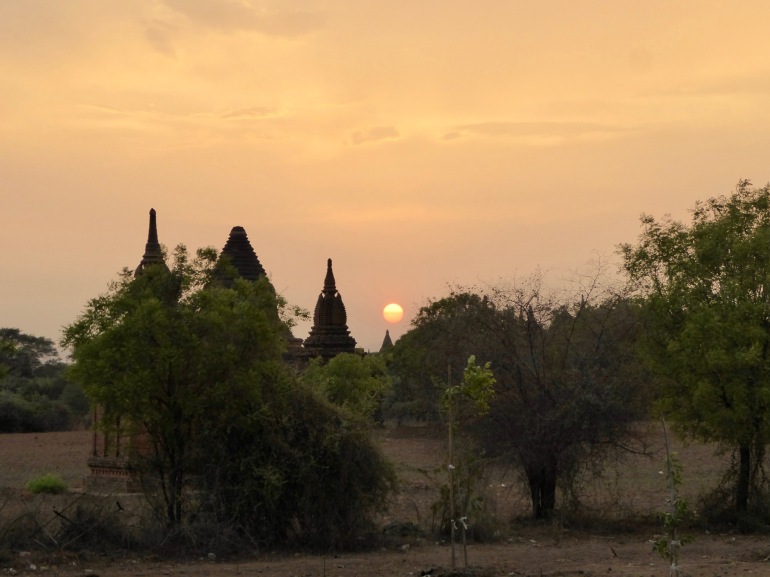 If you’ve been to Angkor Wat, then you will already know the poetic power of immensity. But Bagan operates at a different level. The immensity is spatial- over 3,000 monuments concentrated in one site and of varying sizes and splendour. These monuments were like a preparation for the Shwe da Gon in Yangon. However, it was always the magnificence of the stories, the storytelling that in my mind came to rival the edifices. The lattice work of words, the struts and ramparts, the sentences and pauses, how in the telling breathing and movement coalesced, first to form the illusory shadows that spring up between people, channels of persuasion that are unseen and then what can only be termed the glimmering irreducible, even elemental prowess of emotions- moral, yes but also entertaining laughter, joy and sadness. 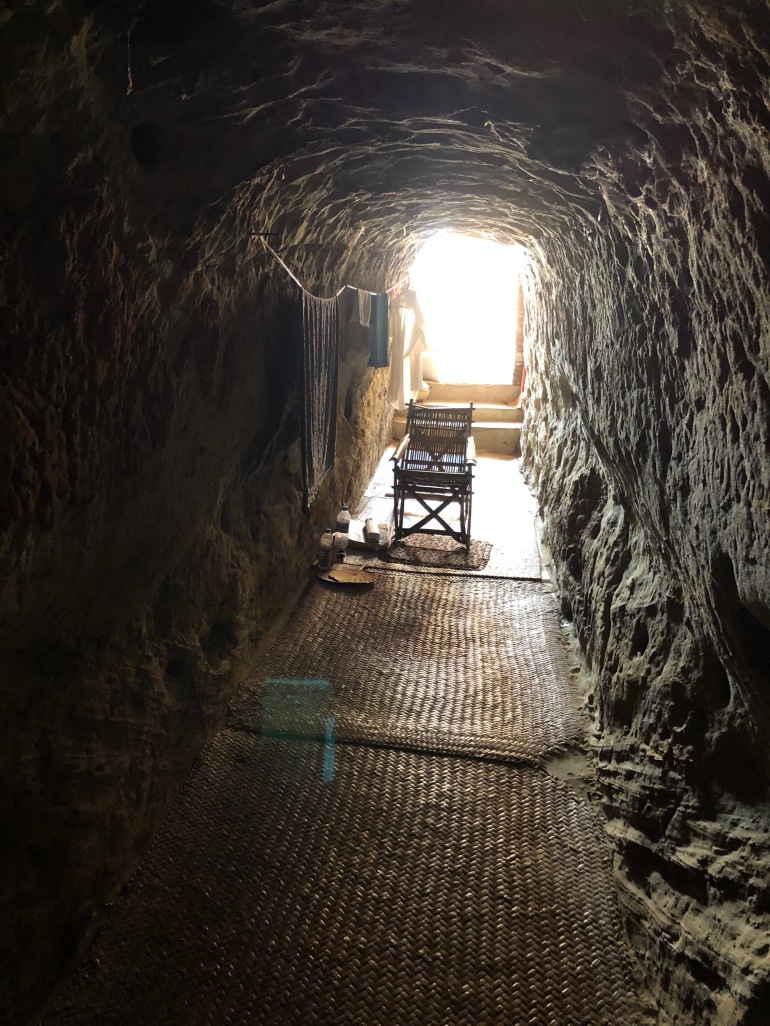