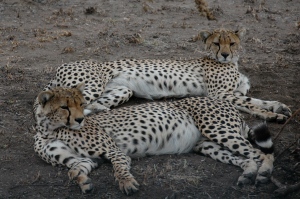 If you are in the Serengeti, and you look across the sea of grass, for that is what Serengeti means and is, a sea of grass, you will see how boundless is that space, the Eastern African plains. It stretches on forever and the eye cannot take in the vastness of it. Faraway, the air shimmers like delicate and translucent voile, the hot air rising, rippling like a wave in the distance. If you are there in the dry season, everything is that dull yellowish brown colour of dust.

And if you are that way inclined, you will come to know what transcendental means, the limitless space invading your inner world and drawing you out, your soul I mean. Suddenly you realise how insignificant we are, us humans, and how fragile, how vulnerable. If you look up at the sky and it happens to be a clear cloudless day, the infinite blue of the vault of heaven might transport your consciousness beyond the strictly mundane ordinariness of living, of waking and eating, and sleeping, and perhaps even climbing the greasy pole.

The eye needs to adapt to the light, to the distances, and the colour of the grass and the absence of contours. If you’re lucky you might chance upon a pair of cheetahs, reclining on their haunches. A studied indolence, nonchalant and indifferent to the heat and the surfeit of prey, is apparent. Majesty is not seated on a throne set on a dais. It is not perched on an ornamental and embroidered cushion. It is not weighted down by countless gems, neither by gold or silver. Its stateliness is not symbolic or constitutional. It is lived in the very speed and agility that it possesses. Power that is able to recline ought to be feared. If it is propped up and dressed in ermine, it is merely symbolic. It is for show.

But power has this insidious means of corrupting whoever wields it, even in the liberal democratic West. Soyinka’s A Play of Giants is a thinly disguised examination of four of Africa’s best-known despots, President for Life Macias Nguema, Emperor for Life Jean-Baptiste Bokassa, Life President Mobutu Sesekoko and Hero of Heroes, Life President The Field Marshall El-Haji Dr Idi Amin. This is a play about the psychopathology of power. In Soyinka’s hands power is exemplified by the arbitrary display of authority over life and death (see below) and also is intimately related to access to females (in the case of male leaders) for sexual favour:

GUNEMA. Zombies. Turn them into zombies. Is better. Any fool can understand government, but power! Amigos, that is privilegio. To control the other man, or woman. Even for one minute. Not many people understand that. When you control from birth to death, when the other man and woman know, in thousands or millions – I control your destiny from this moment, from this consciousness till the end of your life, now that is power. Even the animal world understands power, even the insect world. I have studied the colonies of ants in my garden. I sit down and meditate and collect my power from the night, and I watch the insects. Is very useful. I am not sentimental.

TUBOUM. I like to see the fear in the eye of the other man. If he my enemy, it is satisfactory. But it does not matter. If friend, it is better still. Even total stranger. Because I see this man telling himself, Tuboum does not know me, I am nothing to him, so why should he do anything to harm me. But he is afraid, I know it. I can see it in his eyes. I walk into a village, nobody in this village has seen me before but, the moment I arrive, I and my striped leopards – the village head, his wives, the priest, the medicine man, they are afraid. Sometimes I ask what is this fear I see? Have they been discussing treason before my arrival? Have they been holding meetings with rebellious Shabira tribesmen? But I know this is not the case. My spies have reported nothing, and they are good. They are afraid, that’s all. Barra Tuboum has brought fear into their midst.

GUNEMA. Ah, but it is possible. It happen finally. I tell you. It happen like this. I sentence one man to death who I suspect of plotting against me. While he is in condemned cell, his wife come to plead for him. She is waiting all day in the house and when I am going to dinner she rush through my guards and fling herself at my legs, I am sorry for her. So, I invite her to have dinner with my family. Well, I make long story short. I tell her what her husband has done, that he is an enemy of the state and that the tribunal is correct to sentence him to death. She cried and cried, I feel sorry for her but, justice is rigid span of power, it must not be bent.  My wife she is silent, she knows she must not interfere in affairs of state. That night, after my family retire, I take her to bed. Perhaps she think by that I will reprieve her husband, I do not know. We did not discuss it. But, I take her hand, and she follow me to my private bedroom. When I make love to her, I taste it at last. It is strong taste on my tongue, my lips, my face, everywhere. It rush through my spine, soak through my skin and I recognise it for that elusive, overwhelming taste. Every night I made love to the woman, the same taste is there, nothing to compare with it. Nothing [That elixir].

These are fictional elaborations of psychopathology. But, power has this tendency to shift how the land lies, to warp the hinges so as to distort how far doors open or whether they open at all. But there is a sense in which each character, in Soyinka’s play is saying something that we know already. Pol Pot, Clinton, Bush all become understandable once we acknowledge that power is associated with the desire for ultimate power, that is over life and death, and how masculine political power by extension cements its authority too on access to females. The animal kingdom exemplifies this.

There is a different kind of dynamic at work in those cases of power that clings on regardless of the mounting body count, and despite the seemingly obvious, that oblivion both historically and personally might be the end result. Ghaddafi and El-Assad are but two recent examples.  Elias Canetti’s Crowds and Power, a monumental work, written after the 2nd World War, attempts to come to terms with Nazi Germany, and the magnitude of the toll of life sacrificed for adherence to ideology. Canetti’s book was first published in 1960 but already it reads as if it was from  an entirely different time. It is ambitious in its scope, forensically detailed in its analysis, scholarly and well written. Its arguments have a symphonic architectural span, with clauses & sub-clauses, combining all the devices of rhetoric and polemic to make its points. For the Twitter age, with everything densely and pithily condensed into 140 characters, Canetti’s magnum opus might seem obese and indulgent. Nonetheless, this is a masterly examination of the nature of crowds and of power, particularly of the malign influence of power. Canetti draws particular attention to the role of survival, of being a survivor, on the actions of rulers

In order to satisfy this craving [for survival] it is not necessary to expose oneself to danger. No one man can himself kill enough other men. On a battlefield, however, there are thousands all acting in the same way, and, if a man is their commander, if he controls their movements, if the very battle springs from his decision, then he can appropriate to himself all the dead bodies which result from it, for he is responsible for them. It is not for nothing that the commander in the field bears this proud title. He commands; he sends his men against the enemy, and to their death. If he is victorious, all the dead on the battlefield belong to him, both those who fought for him and those who fought against him…The significance of his victories is measured by the number of the dead. 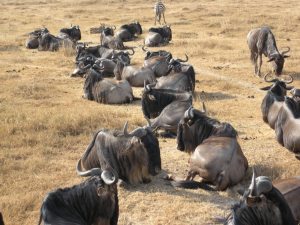 The reclining cheetahs and the wildebeests as the evening draws in, in the Serengeti point to a different dispensation, not of transcendence, not of transfiguration, but of brute force. Darwinism played out nakedly, the logic of life and death without sentimentality. And, it is the only higher ape, here in the Serengeti or in the Ngorogoro crater, Homo sapiens, whose presence introduces values, aesthetics, morality, justice, even death, I mean the self-conscious awareness of death, into this primordial space.  Pure unadulterated power is in the purveyance of the cheetahs. Humans have the capacity to escape the lore of power, the capacity for freedom, but continue to be lured and embroiled in the nexus of power and often with malign consequences.

5 thoughts on “Sea of grass”