I am standing in front of Hotel Adlon in Berlin. I’m here in search of Bernie Gunther. After Bernie was forced to resign from the Berlin Criminal Police he worked as house detective at the Adlon. The hotel is exactly as I imagined it on Unter den Linden. I am standing with my back to it and I have the Brandenburg gates to my left. It is a mild December afternoon and there are tourists everywhere, taking photos. I am on the lookout for Bernie Gunther. I have no idea that what he looks like except that he has big feet and wears a wide-brimmed hat of dark-grey felt with a black barathea band. It is often damp. But I have followed him from Berlin through to Munich, to Havana, to Buenos Aires, Prague and elsewhere. In fact I have no idea whether he’s still alive or dead. He was in his prime during WW II and immediately afterwards, before I was born. I have travelled from Birmingham specifically to find him.

I travelled by Eurostar, from St Pancras, changing to TGV at Gare de l’Est to Munich. Dusk came gradually. In the distance, mist hung in the air, a fine bluish net, over the valleys. The occasional spire, a river silvery in the evening light, a copse, and cattle defined the French countryside. The sky turned a pinkish haze over the horizon. And the hills were dark shadows like sets in the theatre.

An hour out of Paris our next stop was Strasbourg. A young German man sat across the aisle from me. He was dressed in a serious blue-black suit and had a red scarf round his neck. His bag was custom dark-blue leather, a doctor’s briefcase. But, I didn’t think he could be Bernie Gunther, he was far too young. In any case I imagined Bernie as stocky, broad shouldered and perhaps with a slight paunch. My young man was lean and athletic, too well cut for a detective.

The train travelled through the darkening evening light. It was as if the sky was changing by the minute, darkening. The trees were all in silhouette, stripped bare by the winter cold, and looked prickly and stark against the sky.

Soon, it was twilight. The lights came on. It was a magical hour. I saw a river like a mirror, snaking through the field. It reflected the trees that bordered it, upside down, in the water. The sky to the west had that glow of subdued orange. The skeletal tree trunks and branches pointed upwards and either solitary like spikes or bunched together like hair, with the yellowish light from the windows playing through them. Close to the railway line, whitewashed houses suddenly appeared and disappeared as quickly, like residues of a world long departed in the aftermath of an apocalypse.

Then finally, it was nighttime and we travelled through a tunnel of darkness, a dark night that was like velvet wrapping, that hugged the train. Only the clack-clack of the wheels on the track, and the swish of air against the train as it swung and turned, as it swiveled reminded us of the rest of the world. It seemed to me that we were travellers in a strange terrain that was both unseen and unimaginable, all the anchors of the real and familiar had been removed. We might as well have been travelling on Mars or Venus.

It was difficult to establish what it was that altered the noise, the train noise that was sometimes harsh, sometimes hushed, sometimes ratcheted into a fast and furious pendulum, and at other times a lullaby, an undertone of breathing, quiet breathing in bed.

We arrived in Germany, Karlsruhe, which in the dark was like all other cities, quite impossible to decipher. We were rushing through the night on our way to Stuttgart. Our train was now travelling at a pedestrian, non-TGV speed. The night flashed by in incidental pinpricks of light, sometimes blue, sometimes sodium yellow, very occasionally neon billboards, but more often simply an immense blackness without any break.

At Stuttgart, we stopped for 10 minutes. Then it was Ulm.

At the next stop there were lampposts on both sides of the track. Bulbous white light or flat strip lights. Mostly empty platforms with a few people huddled together at the station doorways. It was already past 9 pm.

When we arrived in Munich, we crossed the road to eat at an Uygur restaurant. We thought, well, there’s a first time for everything. The chap who served us spoke perfect English. There was a samovar on, just like Russia. It was full of immigrants, young Somali, Eritreans, and Ethiopians with their elegant symmetrical faces and aquiline noses. Here in Munich, I wasn’t much on the lookout for Bernie Gunther.

Now Berlin. I dropped my bags in my hotel, Cosmo Hotel Berlin Mitte at Spittelmarkt. My real business was at Siemens Villa Wannsee that had been given to Arnold von Siemens as a wedding gift, by his father. It was on the bank of Kleinen Wannsee. It had a magnificent garden with numerous follies and grottoes. Early in the morning the sun rose just across from the jetty, a crimson glow through the tree branches. 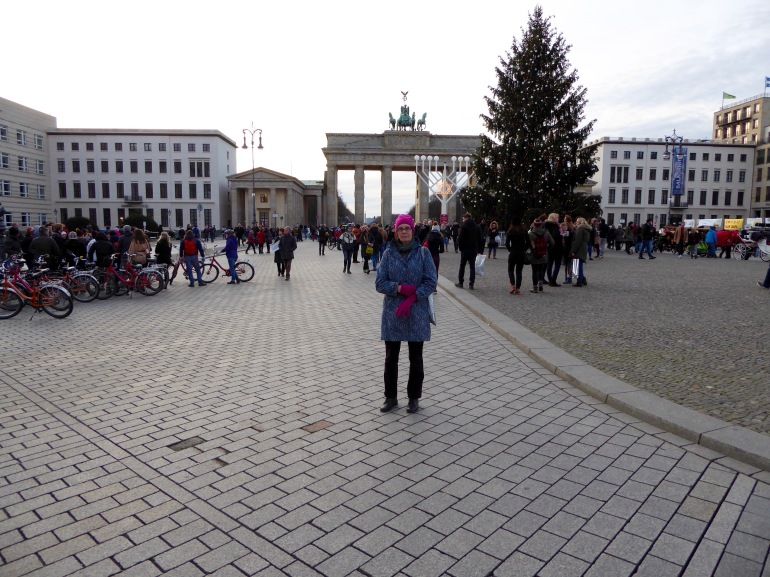 At the end of my business, I walked back to Wannsee station and caught the train back into town. The idea was to stand outside Hotel Adlon, in the hope of catching a glimpse of Bernie Gunther but no such luck. The Adlon was a magnificent building with an impressive entrance. Just inside the foyer was a replica of the building in ginger bread! It was a tourist attraction with large numbers coming in simply to take a photo. Beyond the foyer was the café space with families dressed up, having coffee and cakes. It reminded me of Memphis, the Peabody Hotel. Both the cafés at the Adlon and the Peabody were grand spaces that hosted obviously wealthy clientele. It was all well enough to stand and look around but I wasn’t quite in the class of the clientele so stepped out again and had coffee next door, in a more human scale café.

Dinner was with JC. We picked him up at his hotel, Hollywood Media Hotel on Kurfürstendamm. He was already waiting for us. We set out for a brisk walk to our restaurant. We walked in the wrong direction seeking Hotel Kempinski, another Adlon outfit, as our landmark but did not find it. In the end we waved down a taxi and went to Wintergarten, café haus literature. This was another wonderful building with ornate ceilings. After dinner, much to our surprise JC was happy to come out to a jazz event at A Trane club. We caught a taxi to the club. It was already full but we squeezed in. JC Dook and Dorrey Lyles were playing. JC Dook played the lead guitar, bluesy jazz. Lyles was a woman in her 50s, probably. She was not tall. She was substantial in girth. She was a mezzosoprano with a voice that had steel and honey. Her phrasing was like a hook to reel in the emotions. She exuded energy, delight and immense sexuality, swinging her bottom and gyrating her hips. She led the whole audience in massed singing like as if we were back at Sunday school. It was clear that she had been raised singing gospel. We were there well past midnight. Then it was for walking JC back to his hotel and catching the underground to ours.

Had very distinctive features, with a broad head, bushy brows and a nose that was not long but extremely broad. His upper jaw was broad and long, and his chin and jawbones were exceptionally wide. With his thick neck and stout shoulders, he stood out from other men

And, remarkably there were other men too who looked like Yermolaï

A tall gaunt man of forty-five, with a long thin nose, a narrow forehead, little grey eyes, a bristling head of hair, and thick sarcastic lips

It was now my last day in Berlin. I went to the museum to see Nefertiti. She was beautiful in a lean severe way. Her gaze was direct and unblinking. Across well over 2000 years she looked as composed and alive as she did when her bust was first sculpted. Everything else was an anticlimax after this. 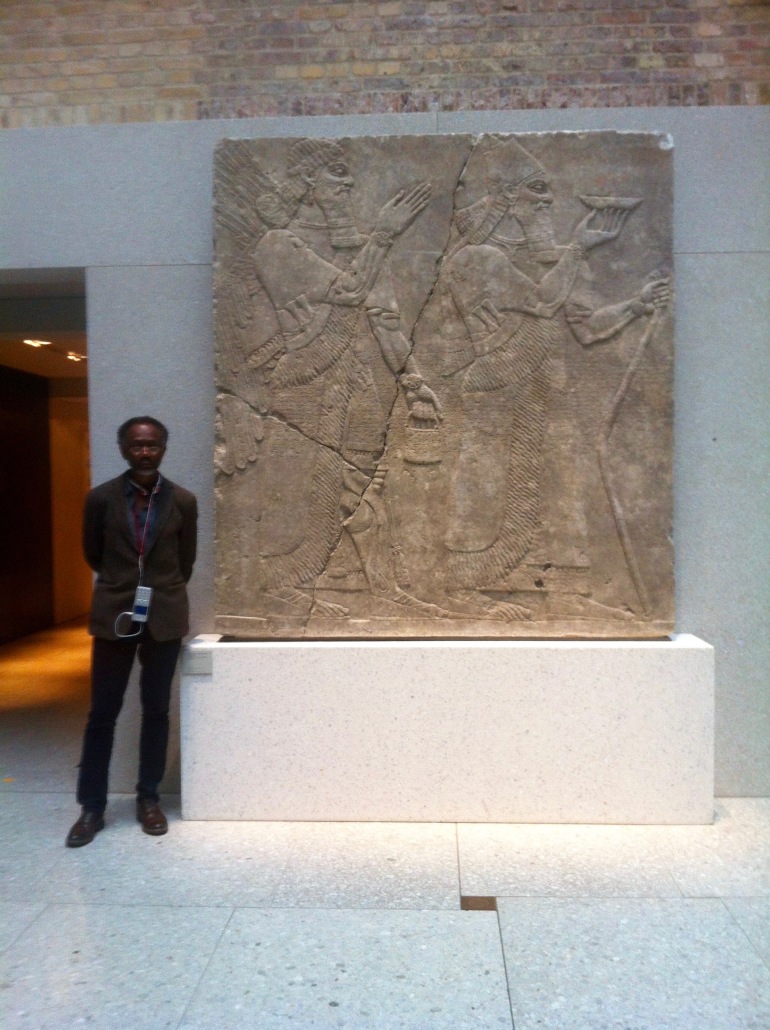 There was a relief of Nimrod (Lamurudu) and I had my picture taken next to it because us Yoruba are thought to descend from one of his sons. Then we went to the gallery housing works from Nubia but we were disappointed that it was more or less closed. Nubia and Meroe’s contributions to Egyptian civilization are altogether ignored as if Lower Egypt could have arisen of itself from nothing.

Bernie Gunther was most elusive this trip. Perhaps next year. 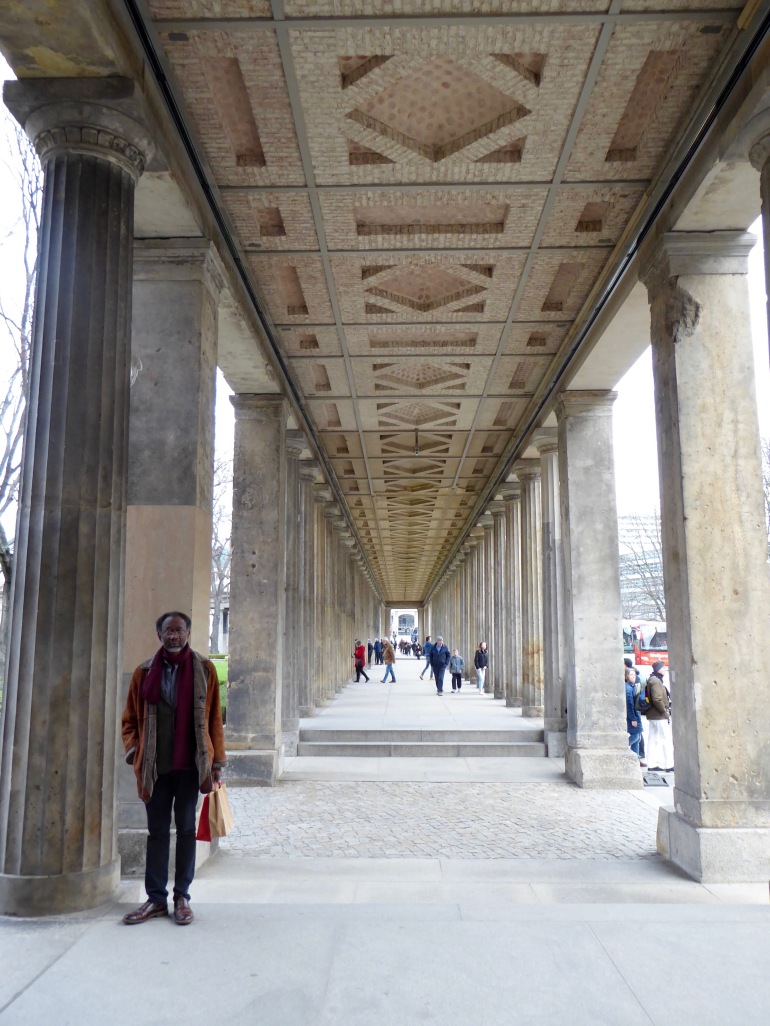 One thought on “In search of Bernie Gunther”