It takes 11 years for Titan Arum to grow from a seedling to this remarkable 2 m fleshy spike and 3 m circumference of leaf-like structure. And, there we were standing before one of these monsters, barely 48 hours away from the spectacular inflorescence. The inflorescence itself lasts 48 hours if you’re lucky and is accompanied by the smell of rotting corpses that ants, bees and flies can detect 3 miles downwind and humans from a mile away. When all is expended, the spike turns into a glorious tumescent growth of red brightly coloured seeds, showy and inviting. 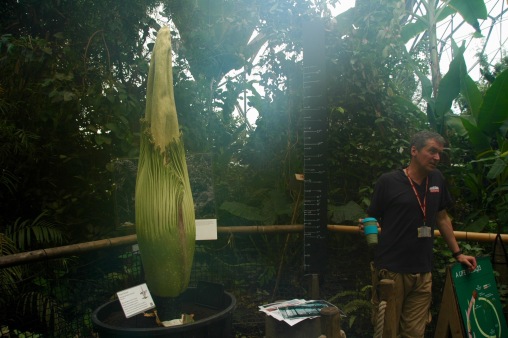 A good way to think of this is to imagine a man spread-eagled on his back and lying on the damp earth, his buttocks the bulb immersed in the ground and his limbs the spathe, the leaf like structures when they’re expired and his genitals the gigantic, titanic spadix all erect and at attention. But, you will have to magnify this vision several fold to get anywhere close to the reality of a titan of the tropical forests of Sumatra.

I overheard some close by flies saying -one of my ancestors came here in the crate from Sumatra with this one and he told us of the legendary smell that is worth dying for. Another cousin said his ancestors had remarked that not since the Battle of the Somme had the earth produced such effulgence and that was marred by tragedy whereas the Titan, well that is all glory, it is life pretending to be dead.  And another fly boasted how his ancestors nestled in the spathe, delirious with ecstasy, feted and sated, were ready once more to breed ivory maggots. What were the chances of any fly witnessing this unique inflorescence anywhere in Europe, if not for the magnanimity of the Eden project?

We were spending the last day of our holidays at the Eden Project. Everything after the Titan was of a different scale. The begonias with their purple and green leaves, the purple flowers of periwinkle or the white flowered variety, black pepper plants with their light green leaves and climbing vines, the deeply green leaves of coffee plants and delicate, ultra sensitive mimosa, these were like afterthoughts after the impending inflorescence of the Titan. 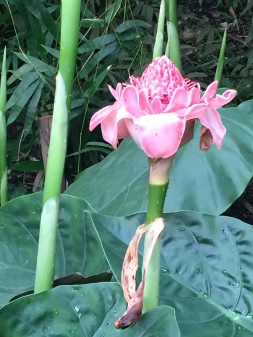 I came across a snowbush, with their green leaves that were brushed and stained by pretend snow. We had a hedge of these in my youth, in Lagos and did not know that this here plant was a parody of snow. Perhaps the shampoo ginger came closest to Titan with its eye catching red torch but perhaps not.

The planet has survived 5 previous mass extinctions! That’s food for thought. We are sleepwalking towards another cataclysm, this time manmade and masterminded by the Great Leader. All this glory, the wonderful and indescribable plurality of life put at jeopardy for a few bucks. That’s another form of tragedy.

We had arrived to stay at Duloe Manor just a few days ago. Lewis Carroll wrote parts of Alice in Wonderland here. We were not staying at the main house, at the manor but in one of the many cottages on the grounds. We arrived on a bright sunny spring day. The light was exactly as it is in Provence- soft with a lucid quality that lights up everything.

Our first walk was from the manor to the medieval stone circle in the fields nearby. Even though we could see the stones we could not immediately find a path to them. We stopped to watch a country/village cricket match. We skirted round the match and walked on the marked footpath- there were pink and white campion everywhere also, primroses, lady’s smock, dandelions, buttercups and bluebells. Overhead, rooks were cawing and flying in and out of their nests. 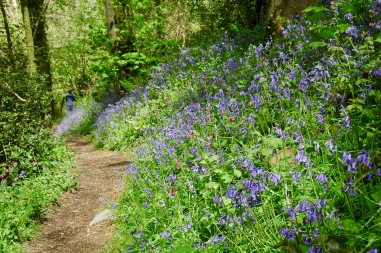 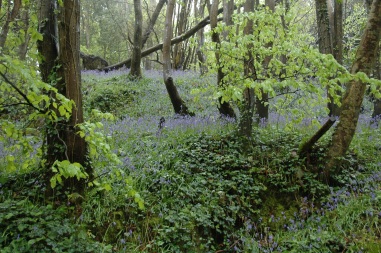 Very quickly the sun disappeared behind the clouds and what had been a pleasant day quickly turned cool as the temperature dropped, as if the wind sweeping in from the coast was pushing it further down. We did not go far, perhaps 2 miles and turned right round back to the manor.

On May Day we drove to Kingsand and walked through to Cawsand. It had rained without stop all of 2 days, almost. We walked up the coastal path, 4 miles of it in a drizzle that did not falter. The view out to sea, from up the path was grey and seen as if through a fine gauze. The cove beneath was picturesque. And across the bay, two yachts were out with their sails open. The coastal path was bordered by vetch, ferns that were not yet fully unfurled, a carpet of bluebells covered the valley floor. There were the occasional ‘white bells’ too. Again there were campion, both white and pink.

We were out to see the annual Black Prince Flower Boat Festival parade from Millbrook through Kingsand and ending in Cawsand. We had lunch at the Halfway House. Back at Kingsand the children had gathered round a maypole and were dancing with bright coloured ribbons. With each dance, the ribbons formed a pattern on the Maypole. Each dance was choreographed to create an even more exquisite pattern of plaits at the top of the maypole. 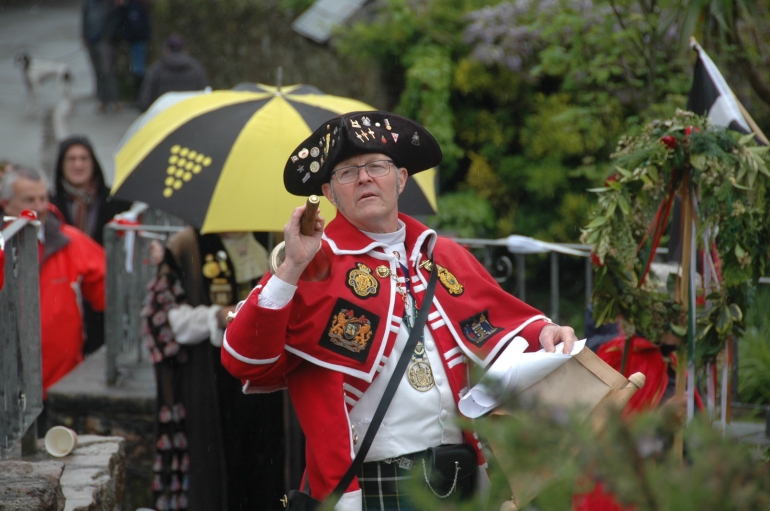 Then the Town Crier called us to order and read from an ancient scroll – the May floribunda would banish the gloom of winter and welcome in the summer, except that it was a cold damp day, hardly auspicious for summer’s start. He prayed too for a successful harvest season from land and sea. Six naval ratings picked up the Flower Boat with 2 walking behind and we set off from Kingsand.

At our first stop, two groups of Morris dancers performed- an older group wearing black trousers, white shirts, black hats and the other group, younger by far, dressed in light blue jeans, white shirts or blouses and were riotous. The young revolutionaries enacted a conflict in Plymouth between the aldermen and freemen.  At the Halfway House Inn, more Morris dancing by the young revolutionaries enacting the 12th century conflict between Cornwall and the French- there was much attack and repel in this dance.

Behind us was a young man with a hidden camel hump of cider connected by pipe to a tap. He mucked about pretending to piss the cider from in between his legs whilst at the same time being free with his drink. In his company were two young women dressed as green men- in frocks decked in leaves and their faces were painted in green and glitter. An acquaintance lamented being a family man now and far too old to lark about in green costume, getting inebriated on cider.

W had been out 4 hours. We drove back to Duloe along the most treacherously narrow lanes in Cornwall, winding along the coast’s precipitous cliffs and the utter beauty of the valleys suddenly opening up as we turned a corner to reveal rounded and green hills with the grey sky and bluish grey and steel coloured sea in the distance.

New words are some of the most priceless discoveries of these trips away. At Kingsand, the house names- Moonfleet, Seagarth, Seaview, Tamarisk and Spindrift made concrete and new what was already old and known.  At Carnglaze caverns, it was the names of  fossils, stones and minerals that made it for me- silicates, phyllosilicates, cenartz, fluorites, chinastone, feldspar, orthoceras, amethyst, red haematite, deep dark purplish morion quartz, and black zinc blende. 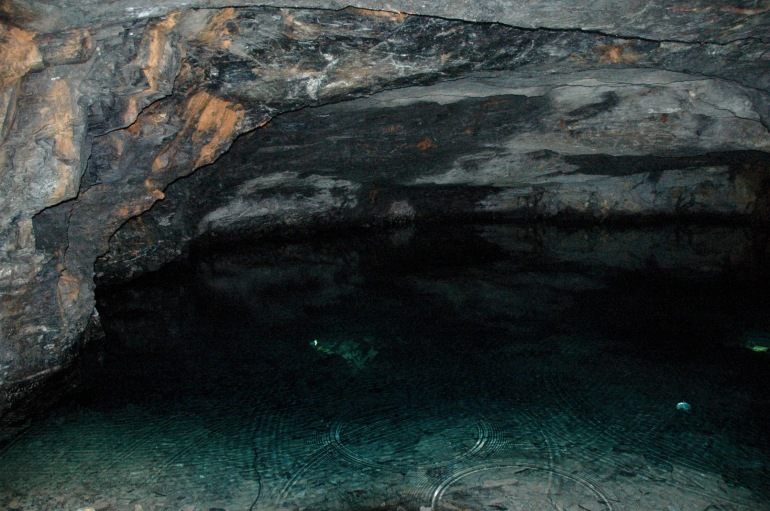 The cathedral cavern had rust red walls that were also brown, yellow, orange or a different shade of red. The baby pool was turquoise and the mother pool was shimmering with ripples that fanned out. Our walk through the enchanted dell with faeries and azaleas and rhododendrons in bloom was strangely enchanting.

We went to Golitha falls, where the river Fowey cascaded down 90 feet from its source at the Brown Willy on Bodmin Moor right down to Fowey where it entered the sea. The river flowed and meandered through gorse and grass, bluebells, lichen and moss. Right here at Golitha falls the birds twittered and this was the backdrop to the indescribable gurgling of the river running over rocks, splashing through cracks and openings and then splayed out in spray and spume. 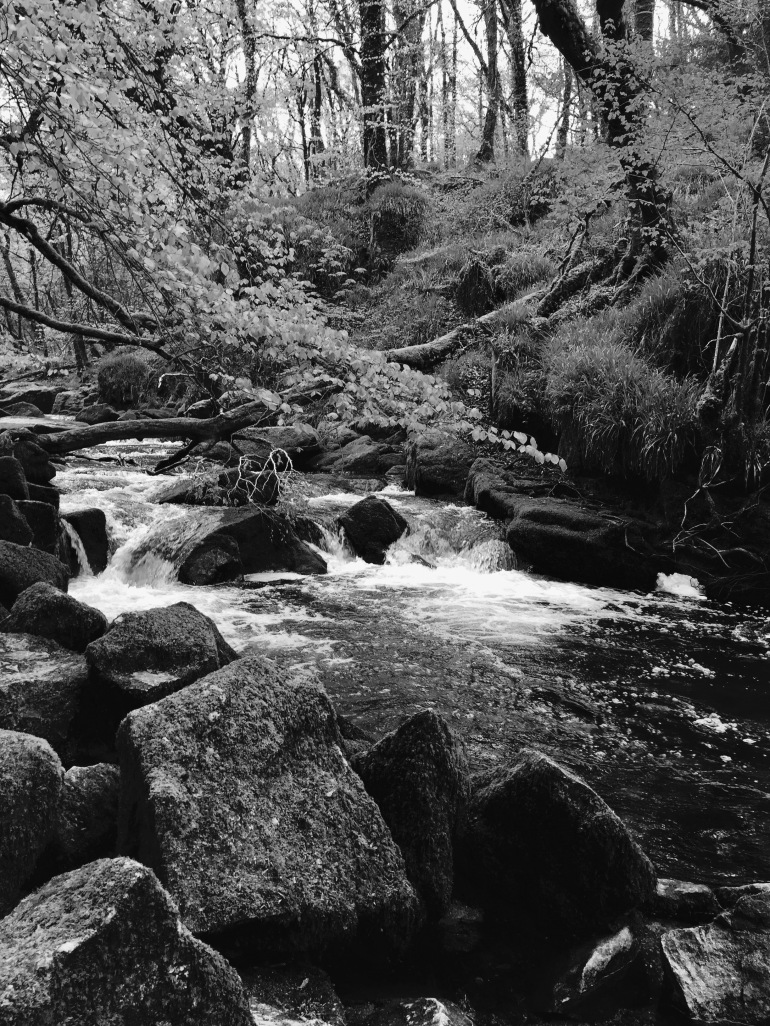 To end the day we drove up to Bodmin moor along the river. There was gorse everywhere. The moor looked as if it had been sprayed or sprinkled with red gold that shone in the late evening light. The brilliance was like an outpouring of song in church. We stopped for a drink at Jamaica Inn and from up there we could see the top of the moorland around, perfectly rounded, perfectly stretching out to the valleys below.

Then it was time for the seaside at Seaton beach, a grey-coloured sandy beach. It was a medium sized bay with a café at one end and the start of a promenade at the other end. It was impossible to walk bare-footed on the stony beach. Out to sea we could see Looe snuggling into the hillside and the vast ocean just going out into the forever. Inland was Seaton valley itself. The trees up the valley were all fresh with delicate newly sprouted green leaves. Then even more gorse in clumps of yellow like giant pollen dusted on the horizon. 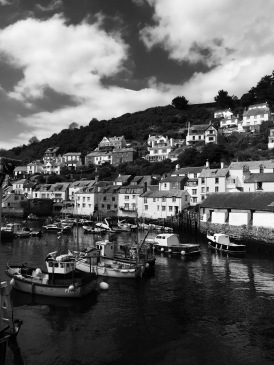 At Polperro harbor we came across the most perfect natural harbor ever. There was a long inlet into the harbor proper. The homes on one side were exactly as you would imagine a harbor- cottages cramped together, white washed with the odd blue or black splash of color. Narrow and intimate spaces crying out for smugglers and wenches. We stopped for drinks at the Blue Peter Inn, a small pub on the first floor just round from the harbor. The ceiling was black oak, low narrow beams with sayings- ‘Beer was invented so ugly people can get laid’; ‘the more people I meet, the more I love my dog’; ‘I would argue with you, but then we would both be wrong’. The barmaids were a trio of one brunette with shades on her head, one blonde in jeans and a blue jersey and a third older blonde and still comely. They were all cheerful.

We are now safely home. Some 150 miles back in the Midlands and the sun is out. I am sure that the Titan Arum would be its majestic self today and maybe, just maybe if I put my head outdoors I might just catch a whiff of its magnificent smell of decay. Death is just there in the undergrowth of life.